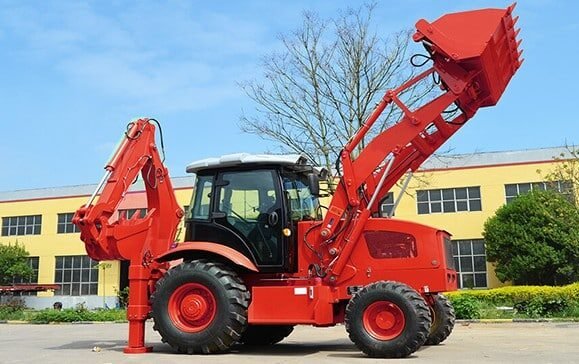 There is a lot of heavy machinery out there that can be used for construction projects, but two of the most popular are Backhoes and excavators. So, what’s the difference? Which one suits your project? Get to know once and for all!!!

What is an Excavator?

Excavators are heavy construction equipment consisting of a boom, dipper (or stick), bucket, and cab on a rotating platform known as the “house”. The home is supported by a set of wheels or rails. They are a natural progression from steam shovels and are often mistakenly called power shovels. All movement and functions of a hydraulic excavator are accomplished through the use of hydraulic fluid, with hydraulic cylinders and hydraulic motors. Due to the linear actuation of hydraulic cylinders, their mode of operation is fundamentally different from cable-operated excavators which use winches and steel ropes to accomplish the movements.

What is an Excavator Used For?

Without further ado, here are 9 applications for an excavator:

1. Excavators are employed for demolition and material handling on construction sites, respectively.

2. Excavators are crucial for dredging operations.

3. Unless it’s something really small, miners find their work to be simple with the excavator nearby.

4. With the help of an excavator, heavy pipes can be moved from one location

5. With the help of an excavator, heavy pipes can be moved from one location to another with ease. This frequently occurs when operating pipelines.

7. Excavators are also utilized in addition to graders

8. Excavators are employed in earth moving

9. Trench digging is done with the aid of excavators.

10. They are employed during construction to remove barriers and dig foundations.

What is a Backhoe?

A backhoe also called a rear actor or back actor is a type of excavating equipment, or digger, consisting of a digging bucket on the end of a two-part articulated arm. It is typically mounted on the back of a tractor or front loader, the latter forming a “backhoe loader”.

Digging a Trench: Backhoes have a bucket attached to one end of them for digging purposes. Simply drive the vehicle and insert the structure that resembles teeth into the area you want to dig up. And you may take advantage of this backhoe’s ability to dig a trench so you can build a well-organized pipping system.

Cleaning up a Work Site: It’s typical to see dirt heaps accumulate at construction sites. You can see its building site, a location where deforestation is taking place, and a farm. The dirt mound can be dug up and removed with the use of a backhoe to make room. Pushing the dirt mound aside can also be accomplished without much effort.

Contributes to deforestation: Tree removal is one method used to combat deforestation. The removal of trees from forests is undoubtedly a task that cannot be completed by human labor alone.

Road Leveling: A plow that has the opposite end from the bucket can be used to level and smooth out a road’s surface.

Removal of Snow Winter, snow, and western countries are three concepts that will always be linked. And about this, snow-related problems—roads covered in snow, blocked by snow, or slick from snow—are a constant issue. Finally, the answer to all is implementing a Backhoe.

Key Differences Between Backhoes and Excavators

If you are not yet sure which one is right for your project, keep reading to learn more about each one.

The size difference between backhoes and excavators can be quite dramatic. An excavator is much bigger and weighs more than a backhoe and can reach a massive 15 tonnes. This size difference can have a big impact on the type of excavation jobs they can do. Large-scale industrial projects are a good fit for excavators, while small and medium-sized construction projects are better suited to backhoes. This size difference is often a factor in which machine is better for what you’re planning to do. An excavator is more suitable for large construction projects, such as mines, while a backhoe works best for smaller tasks, such as snow removal or farming.

Backhoes are smaller and more compact than excavators. Excavators have a much wider range of uses than backhoes. Excavators are typically used for excavation, trenching, or digging holes. Some models can also be used for landscaping and lifting large objects. They can also be wheeled, which makes them more versatile.

A backhoe is a common type of excavation machine that features a standard tractor base with a digging bucket mounted at the end of a two-part jointed arm. Backhoes can also be equipped with front loaders and other attachments. The operator sits in a seat that swivels in all directions. Some jobs can be completed with either backhoes or excavators, like excavating, but some only work with one type of equipment. Make sure the equipment you purchase is capable by considering the unique jobs and attachments your project will require.

A backhoe is a versatile piece of equipment that is used for excavation work. It has a two-part arm with a rotating bucket at the end. It has an average rotation range of 200 degrees which is sufficient for digging deep holes and trenches. These machines can also be equipped with an auger and tilt rotator for extra versatility. They weigh around 17,000 pounds, which makes them ideal for light to medium-duty work.

The main difference between backhoes and excavators is their rotation range. While an excavator’s arm can rotate 360 degrees, a backhoe’s arm can rotate only 200 degrees. Backhoes can be used for trenching, heavy lifting, and stack driving, but they are better suited for farming, snow removal, and loading tasks.

When comparing backhoes and excavators, it is important to note that backhoes are more versatile and can be driven on roads, while excavators can only be rotated about 200 degrees. The larger excavator is more powerful and better for large industrial projects, such as mining, while a backhoe is better for smaller jobs and projects.

The mobility difference between backhoes and excavators is very noticeable. While both machines can dig and carry materials, the backhoe’s tires provide more maneuverability. Excavators require a carrier vehicle to move them between job sites. A backhoe can move as fast as 15 mph on the road.

Backhoes are typically smaller than excavators. While both machines have buckets, backhoes have two ends. Their front end has a large loading bucket. The backhoe is more maneuverable than an excavator and can be safely operated on finished surfaces. It is a necessary tool in municipal operations.

Backhoes are also more versatile than excavators. Since they can drive on roads, they are the better choice for job sites with varying terrain. A backhoe’s arm can pivot up to 200 degrees while an excavator can only rotate in a complete circle.

Backhoes are ideal for a variety of tasks and can be equipped with different attachments, such as buckets and blades. Although an excavator is a better choice for larger projects, it’s also better suited for general farm use. In addition to digging holes, backhoes can also be used to move hay and crops.

Backhoes and excavators are similar in size, but they have very different capabilities. Backhoes are smaller and faster than excavators, which can be helpful for projects with limited space. They are also easier to maneuver on a smaller work site, and they have more attachments available.

Backhoes have larger buckets and can lift heavier materials than excavators. A backhoe also has a more stable cab, allowing the operator to have a better view of the worksite. A backhoe’s hydraulic arm can pivot in varying directions, making it easier to lift materials into place.

The versatility difference between the backhoes and excavators is not as big as it might seem. Both machines can do many different tasks, but backhoes can handle larger tasks, such as clearing large plots of land. A backhoe is also much more flexible in its usage since its bucket can be replaced by other implements.

The versatility difference between backhoes and excavators is often related to the type of work you’re performing. Backhoes can be used for a wide range of tasks, such as the plow and piling snow, load salt trucks, and more. They are better suited to farming jobs than excavators, though backhoes can also be used for larger construction jobs.

How Then Do You Make A Choice?

If you have a large work site or need to dig in multiple locations, the backhoe may be a better choice. While some tasks can be performed by either machine, others can only be completed by an excavator. When choosing heavy equipment, it’s important to consider the tasks that each machine is capable of as expatiated above, as well as the available attachments. You are always welcome to contact us for suggestions.

Facebook
Twitter
LinkedIn
PrevPreviousA Complete Guide On How To Use A Mini Excavator Properly
NextHow To Operate A Micro Digger Correctly: Step-by-Step GuideNext